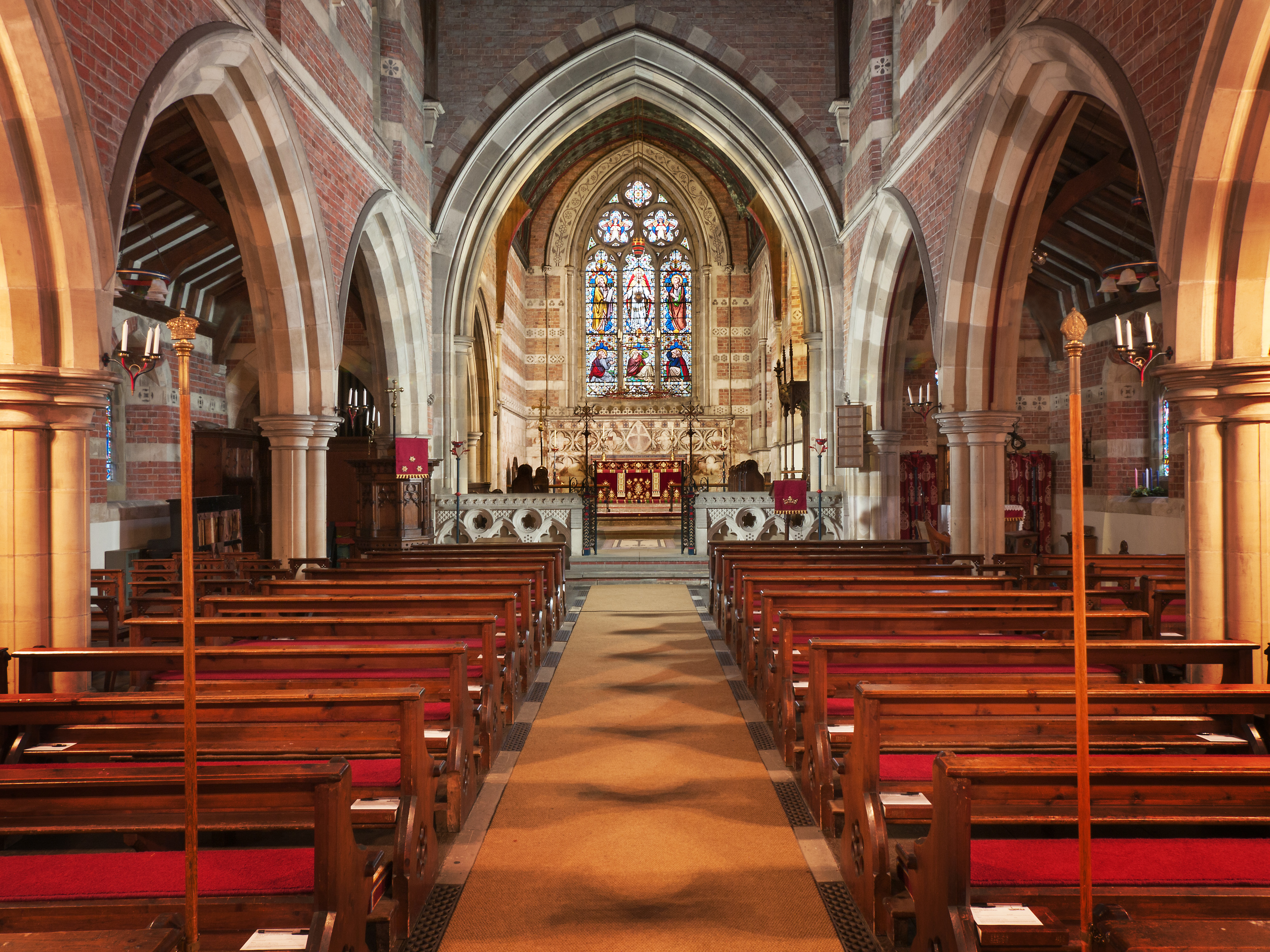 Church log books recording repairs and projects carried out at St James’ were not introduced until 1987.

Listed below are outline details of such work carried out on the church together with “landmark “ events which have been extracted from PCC minutes which go back to 1938, and from documents held in the  County  Records Office, Northallerton.

1846 . William becomes 7th Viscount Downe on death of his father.

1847. Moves to Yorkshire and lives in Baldersby Park.

1855? William and Mary decide to build a beautiful church on their estate. Enlist William Butterfield as Architect.

1857. 26 January. Viscount Downe dies in Torquay and is buried in the St James churchyard.

1857.  Church dedicated on Sep 29th 1857. Archdeacon Edward Churton, Archdeacon of Cleveland, and Rector of Crayke gives the address the theme of which is “Thankfulness” .

Peel of eight bells, cast by Taylors of Loughborough were given “first touch” to the Otley Bell Ringers. There was a malfunction as the seventh bell could not be raised as the clapper struck the wall of the tower. The bells could only be chimed.

1891. Rev Payne writing in the Parish Magazine. (Edition 65)  states: “It would much add to the success of the Reading Room (Rainton) and tend to encourage the desire for order and improvement if the farmers would all subscribe and occasionally use the room which is intended for social comfort and convenience” Parish Magazine. Annual Subscription, 1s

1902. 20 March. Fire breaks out in Baldersby Park destroying much of the building.

1905. Bells deemed unringable in the “The Bell News and Ringers Record”

1920. Conveyance of School Buildings and School House and a parcel of land  amounting to 0.660 acres all told from the Downe estate to the Vicar and Church Wardens. Should the school close the site would revert to the estate.

“We have no hesitation in saying that your tower is the worst case of overloading that we know of”. Ellacombe Chime Apparatus “Very poorly fitted having no ratchet and pawl adjustment for      each rope” (Letter 22 Sep 1927)

1939. Faculty granted for the installation of a tablet in the memory of Major Foulkes.

1939. Inspection of bells and belfry carried out to see if there was any danger of collapse.

1941. Secretary  writes to the Bishop pointing out continual changes of vicar were detrimental to the well being of the church.

1943. Alterations made to the choir stalls.

1944. Secretary writes to Bishop of Whitby asking for the return of Rev Boddy.

1944. Problem with the chancel carpet. Several clergymen had tripped over it and had narrowly escaped injury. Carpet removed

1944. Secretary advertises for the following posts: Stoker 5/- per week, Cleaner 8/-per week

1945. Rev Boddy returns. At the  PCC Meeting held on Wednesday 7 Nov gives a short resume of the war years and his experiences.

1945. Expert to be called in to examine the church bells – preferably from Taylors of Loughborough who hung them in the first place.

1946. PCC agree to add the names of those in the parish that fell in World War II to those names already on the memorial.

1947. One ton of salt bought for use on the church paths.

1947. Buckles repair the vestry chimney which had been struck by lightning and removes jackdaw nests.

1948. Coconut matting laid down the aisle.

1948. Electricity installed in the Rainton Mission Room at a cost of £11.

1950. East window reported in danger of breaking. Provisional estimate by Anelay Ltd for the repair.  Amounts to £250.

1951. Electricity installed in Church by Thompsons of Thirsk at a cost of £115.

1951. PCC draws up list of duties for church cleaner, Mrs Rigg. Mrs Rigg authorised to buy an electric fire and an electric boiler for hot water.

1951. Baldersby Mission Room benches sold to the Cricket club for 25/- each.

1953. Church Wardens staves left to the Church by Miss Gillam as a memorial to the Rev Jones, former Vicar of the Parish.

1953. PCC agrees to buy 50 copies of the Coronation Service.

1953. PCC agrees to funding repairs to Vicarage Roof. Hargreaves of York to carry out the repairs at a cost of £886-18-7. Viscount Downe offers £25 per annum over a seven year period towards vicarage roof repairs.

a. Church of St James was built because Lord and Lady Downe wanted a beautiful church on their estate.

b. The purpose of the prominent cross within the graveyard was to commemorate the fact that the land encompassed by the graveyard wall had been given to the church by the Downe family.

c. The church suffered from subsidence and poor foundations hence the recent problems with the east window.

1954. New Hymn and Prayer Books bought through a bequest from Richard Fuller

1957. Relatives of Viscount Downe request that PCC be responsible for upkeep of Downe Family graves. PCC  negotiate a fee of 10/- per annum.

1958. Hands of clock found to be too heavy for electric motor and changed.

1959. Faculty granted for the Brennand Memorial Tablet to be installed.

1962.  Inspection of lightning conductor and weathervane carried out

1965. Litter basket installed for dead flowers at back of Church.

1967. Church broken into and locks damaged

1968. PCC approves the sale of the Vicarage.

1968. South aisle roof inspected by Architect and deemed in urgent need of repair.

1970. Chapel furnishings from Skellfield School offered to PCC who accept.

1976. PCC approves the purchase of Welton House, Baldersby St James. Welton House to be the new Vicarage. To be paid for through the sale of the Old Vicarage adjacent to the Church.

1977. PCC proposes to fence off the Churchyard and graze off the grass with sheep.

1978. Bristol bookseller contacts PCC to say he has a Record Book of St James’ Church dated 1859. PCC replied that they were not interested.

1978. PCC consider creating a Garden of Remembrance in the Churchyard for those who had been cremated specifically Miss Mather, (Left £2000 in her will to the church.) Mr. J Stephenson, and Mrs Dixon.

1978. Rainton Mission handed over to Rainton Village.(Bought by Baldersby PCC for £10 in  1953 but County Hall had no record of the transaction.)

1981. Rev’d Walter Smith appointed Vicar of Topcliffe ,Dalton and Dishforth thus reuniting most of Ancient Parish of Topcliffe under one incumbency.

1984. Judge Gill writes to the PCC complaining of children turning Baldersby Mission Room into a play area and disturbing the peace. Archbishop of York involved.

1984. PCC  approve oak sign board with the name “St James the Great” to be placed at the Lych gate entrance.

1985. New gates at Lych gate made and hung by Mr Willis free of charge.

1987. Safe donated to church for the storing of church silver by Mr George McLean.

1987. Archdeacon during visitation states that church is to maintain a log book for repairs.

1987. Tower windows damaged by children. Parents to pay for damage.

1988. Visitors Book purchased and placed in the church.

1989. Letter received from Dr C P Turner, Tower Captain of St Mary’s Church, Stow in Lindsey, Lincoln stating that he wishes to buy the Dawnay Bells. The Vicar declines to part with them.

1989. Two  candlesticks stolen from the church.

1990. Storm damage suffered by the circular west window designed by Wailes. Quote of repair from Ripon Glass £521. This was too expensive and temporary  repair work was done by Mr Terry Potter thus keeping out the birds.

1991. Ist August. Deanery of Mowbray created by merging the Deaneries of Thirsk and Northallerton.

1992. PCC consider repairing the Chancel Ceiling with a grant from English Heritage.

1992. Church broken into and a window damaged.

1994. Archdeacon during visitation, decrees that silver and altar frontals be professionally photographed.

1994. Baldersby Mission Room floor repaired and a “time capsule” put under it by children from Baldersby St James Primary School.

1996. July 1. Rev’d David Baker retires and moves, with his wife Marjorie, to Ripon

1997. Diocese decide to sell the Vicarage at Baldersby  St James, (formerly Welton House). Part of the money from the sale used to repair Topcliffe Vicarage.

1997. The Rev Christine Haddon-Reece inducted. Lives in the new vicarage at Topcliffe with her husband David.

1998. PCC carry out research regarding the possibility of ringing the  bells at the Millennium. Verdict, possible but to be chimed only.

1998. PCC endorses use of New International Version of the Bible.

1998. 22 December. PCC meets and decide to re-activate the bells in time for the millennium.

1999. New lectern bible donated by Mr Michael Walker and from the estate of the late Mrs Susan Helps

1999. Millennium Seat installed on south side of church overlooking the Churchyard.

1999. Electric lighting installed inside the tower.

2000. 6 February. Service of re- dedication of the Bells conducted by the Right Reverend Robert Ladds, Bishop of Whitby

2000. Time capsule installed in the Church.

2003. Brass Memorial plate installed on the organ in memory of Mrs Barsties, much loved Church Organist and PCC Secretary for sixteen years.

2003. March 18. Quinquennial Inspection carried out by Church Architect, Sebastian Rowe. Highlights repair work required to save  the tower and spire.

2003. April. Adjacent parish of Dishforth joined to Baldersby by Order in Council  on closure of  Christ Church Dishforth .

2005. PCC applies for a grant from English Heritage for repairs to the Tower and Spire and is successful. Tower and spire restored and weathercock re-gilded.

2006. Sound system installed. Financed through a bequest from the late Olive Potter.

2008. June 3. Quinquennial Inspection  carried out by Church Architect, Sebastian Rowe. Report focuses on the poor state of repair of the rainwater goods  and drainage.

2011. Improvements made to church lighting. Financed through Parish Funds.

2013. June 4. Quinquennial inspection carried out by Church Architect , Sebastian Rowe. Report highlights the poor state of repair of the nave and chancel roofs.

2016. Church Website set up by Darren Hotchin of Ripon. Financed through Parish Funds.

2018. November 11th. Service of Remembrance and lighting of Beacon to celebrate the end of the First World War at Howefield House Farm (Grid Reference 36157672). Part of “The Battle’s Over – A Nations Tribute. Post service refreshments held in Church adjacent to exhibition of First World War memorabilia co-ordinated by Stuart Carter.

2019. February 10th. Ranson Roofing begin repairs to the Lych Gate Roof. The refurbishment of the cross and light fittings carried out by Churchwarden Mr T Potter. Projected completed by 1 May 2019.

2019.  June 23rd  Dedication of new Altar Frontals, Hangings and Vestments. All were made by Mrs Katy Campkin and Mrs Susan Brown of Baldersby.

2020.  October. Mowbray Deanery circulates Development Plan for the Deanery. To be discussed at the Synod meeting to be held on 8 December 2020.  The Development Plan does not include an Incumbent for the Benefice of Topcliffe.

2021.  January 1st. Topcliffe Vicarage occupied by a tenant having been empty for six months .