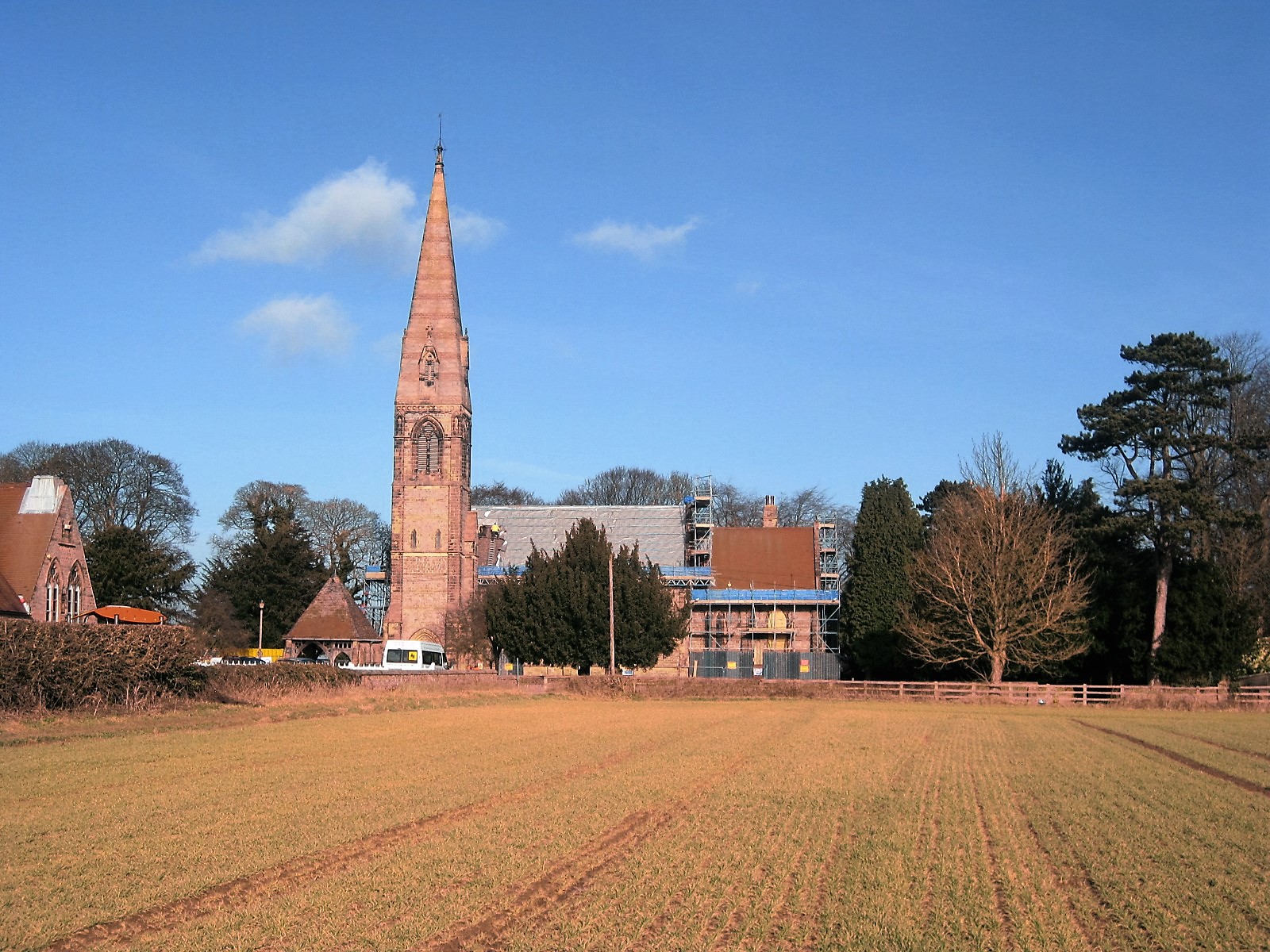 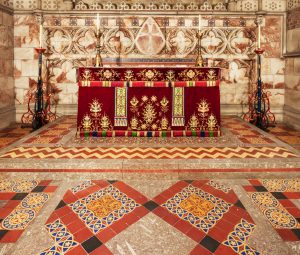 The Church of St. James The Greater
On a rainy day, the 22nd May, 1856 there was laid deep in the earth of a field adjacent to a quiet farmstead called Baldersby Brooms a stone bearing a plate. The plate was inscribed “The foundation stone of this church dedicated to St James the Apostle, at Baldersby, was laid , May 22nd AD.1856. Present at the laying of the foundation stone was Mr R H Norris, of London, who had been tasked to implement the design of the prominent Victorian architect Mr William Butterfield .

Butterfield had been commissioned to build the church by William Henry Dawnay the 7th Viscount Downe whose accession to the title in May 1846 began an eleven year period of vigorous building activity on the extensive Dawnay estates in Rutland and Yorkshire. His father ,the 6th Viscount Downe was a parson and had the means to send his son William to Oxford.

After graduating, William fell in love with Mary Isobel Bagot , the daughter of the Right Reverend Richard Bagot, Bishop of Bath and Wells. Before giving his consent for his daughter to marry William, and knowing him to be a man of great wealth , the Bishop prevailed on the young Viscount to build seven churches. A gentleman’s agreement but one that was honoured by William who , married in 1843, proceeded with the noble act of building churches in conjunction with his architect friend, William Butterfield once he had accession to his title.
The two Williams were influenced by the Oxford Movement and High Church revival with William Butterfield proceeding to design 69 churches between 1840 and 1892 one of which was the splendid church of St James the Greater, (now Grade I listed).

Alas , William Henry Dawnay died in January 1857 and never lived to see his church completed. It consisted of a tower and spire 160 feet in height, the lower part of which formed the porch, a seventy two foot long nave with aisles, and a chancel 26feet by 19 feet. An organ room was situated on the north side of the chancel and a vestry east of that. The church could seat a congregation in excess of two hundred. It was an ambitious project.

The Church was consecrated on 29 September 1857 at a service conducted by his, Grace, the Lord Archbishop of York. The Ripon and Richmond Chronicle it its report of the service published on 3rd October 1857 concluded that the Church of St James “will rank among one of the finest and most beautifully decorated churches in Yorkshire and will long stand as a durable memorial of the Christian virtues of its munificent founder and a beautiful specimen of the skill and genius of its architect”

The church is built from three kinds of stone: Bramley Fall stone from Leeds, a millstone grit, producing a hard grey stone shell, Huddleston, and Rainton. This is the first of Butterfields’s buildings to include dressed stone to emphasise external features such as window sills.

The hard grey stone shell conceals an interior of soft pink bricks, set off by broad bands of white stone and softly lit with stained glass windows. The stone bands are the principal decoration of the splendid interior. The interior stone bands do not always correspond with the exterior bands. Butterfield’s work was largely dependent on, and connected with, coloured material and Baldersby church is one of the few remaining to show a major Butterfield colour scheme in brick.

The design is in many ways conventional for a parish church, containing a nave porch, a nave and aisle, a font close to the door, pulpit on the north side of the chancel arch and the chancel containing the choir stalls and the altar on raised steps. Typical features of Butterfield churches are the entrance space at the west end, convenient for processions and latecomers, the square ended chancel and the organ, which although fine, is not given prominence.

The decorations seen in many places within the church, on the pews, chancel screen, pulpit, on the stone banding, the font, within the chancel and other places are progressions from the simple circle to intricate curved patterns. This is typical of this period of Butterfield’s work.

The font has an octagonal bowl supported on eight circular pillars of Italian marble and has horizontal mouldings at the top and base of the bowl. The octagonal pattern is carried upwards by the splendid ribbed cover which is raised and lowered by a counterweight in the shape of a dove, the traditional symbol of the Holy Spirit. The font cover is steep and sheer like the church spire, an apparent deliberate architectural parallel and is of carved oak. On a shield between two of the small columns, appear the initials of Lady Downe, “M.I.D” (Mary Isobel Downe) with a cross interlaced through the D.

On the wall above the font is a wooden clock, gabled and picked out with dials, decorative circles and pseudo-structural lines on a dark background.

The nave, with its high roof signifying that the praises of God can, figuratively rise to Heaven, contains a monument to members of the Brennand family, who occupied and rebuilt Baldersby Park following a fire in 1900. Also in the nave is a stone- based carved oak pulpit where the octagonal pattern of the font is continued. The pulpit is embellished with a candelabra to which is attached an additional arm furnished with a receptacle for a pocket watch. This enabled the preacher to keep track of the length of his sermon!

The richly decorated chancel is reached through ornate iron gates. Victorian taste at the time for width and full blown curves is reflected in the low stone walls of the chancel screen. The chancel is paved with fossil spotted grey marble from Derbyshire set in patterns of black, red and yellow Minton tiles, again typical of Butterfield, and is lined with Derbyshire alabaster.

The iron work of the candle holders, chancel gates and magnificent corona is picked out with red and blue paint and displays feathery brass foliage. The altar rail was given by a private donor at the time of the church’s centenary and replaced the original which was considered rather heavy and very impractical. (The new altar rail in wrought iron and oak is by George Pace and was installed in 1968).

The altar holds classical jewelled candlesticks, designed by Butterfield, but no cross, as he believed that these be allowed behind the altar, or on a chancel screen, but not on the altar itself. Here the cross is on the reredos, on a raised panel between tile patterns of marble in circles. The altar table is of plain oak.

The chancel contains a monument to the founder William Henry, the 7th Viscount Downe, who died on 26th January 1857, before the completion of the church, and his wife, Mary Isobel. The monument is constructed of white marble and inlaid with a brass cross. There is also a brass in the chancel to the Hon, Guy Cuthbert Dawnay, formerly M.P. for the North Riding who was killed in South Africa in 1889.

The body of the founder, William Dawnay, was originally interred at Topcliffe but was removed from St Columba’s Topcliffe to the Church of St James on the evening following the consecration on 29th September 1857. His grave and that of his wife are situated within a yew hedged enclosure in the churchyard near the eastern end of the church.

With the consecration of the Church in 1857, a new parish came into being which was taken out of the ancient parish of Topcliffe – by – Swale that same river where in 620 AD St Augustine and St Paulinus baptised upwards of ten thousand British men women, and children in one day.

The Church of St James and the surrounding churchyard occupy a site of 1.38 acres.

It is one of some 1300 churchyards to be found in Yorkshire and is currently cared for by a team of volunteers who mow the grass on a regular basis and tend the graves of the three hundred persons who are buried within the Grade II listed churchyard walls. It is an area which respects the generations of dead buried there and provides a place of solitude and beauty away from the pressures of everyday life. As an aid to contemplation the residents of the parish thoughtfully presented the church with the Millennium Seat to be found adjacent to the south wall of the church.

Also listed within the churchyard is the Grade II eighteen foot high cross prominently situated on the south side of the church and the Grade I Lychgate.

You will not find much history in the grave yard of St James the Greater which was only created in 1857. Most of the graves relate to families from Baldersby and Rainton and several generations of Sturdys, Barughs and Potters have been interred within the low bricked cemetery walls. Four past Vicars of the Parish chose to be buried close to the church where they preached and tombstones marking the final resting place of Rev Zechariah Jones , Rev George Boddy, Rev Brian Johnson and Rev Thomas Foulkes are to be found adjacent to the east wall of St James.

With regard to the latter the Rev Thomas Henry Foulkes was Chaplain to HM Forces for the period 1888 – 1914. His wife Ethel is buried with him. They had a son Major Kenneth Foulkes , South Staffordshire Regiment who died in Cawnpore , India in 1938.

That year the Majors’ wife applied for faculty to place a memorial to her husband inside St James. Faculty was granted and the memorial plaque is to be found on the South Aisle wall.

Close by, surrounded by a low yew hedge, are the Grade II listed graves of William Henry Downe , his wife, Mary Isabel, and her second husband, Sidney Leveson Lane.

The former High Sheriff of Yorkshire and owner of Baldersby Park, John Brennand, and his wife, Katharine are buried a few yards away. A memorial to their daughter Violet, wife of Geoffrey Algernon Jones, is inscribed on their grave.

There are memorials to three servicemen in the churchyard:

Their names feature on the War Memorial inside the church.