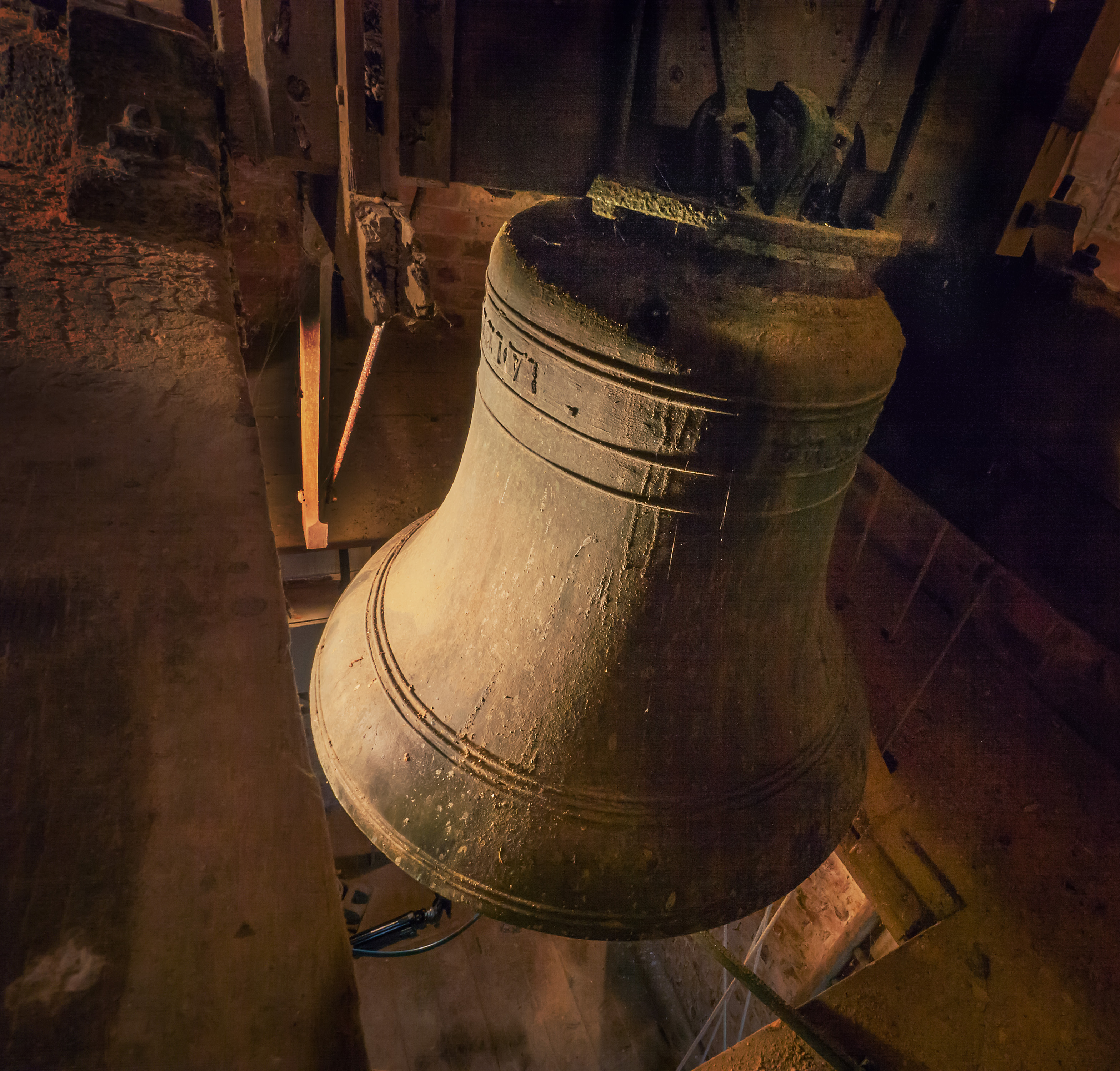 Mounted on a cast iron frame some eighty feet above the ground the slender tower contains a ring of eight bells. Within the porch there is a door which when opened reveals a spiral stone stairway which leads to the ringing chamber and the bells themselves. Above the door is a plaque which states “To the glory of God, these bells were given by Lydia F C Dawnay”. Lydia Frances Catharine Dawnay was the 6th Dowager Viscountess Downe.

Unfortunately the mismatch of the slender tower with an internal measurement of eleven feet by twelve feet overloaded with bells weighing some six tons, and too heavy for the tower by far, meant that the bells have rarely been rung as intended – that is full circle “to the glory of God” On more than one occasion those ringers that tried are reported to have fled the tower in terror on account of its movement and the noise generated by the bell clappers striking the surrounding masonry.

Eventually discretion became the better part of valour and the church authorities of the time decided in the late 1870s’ to dispense with the eight bell ringers and their ropes and install a one man Ellacombe Chiming System by which hammers are pulled by ropes to sound against the rim of the bells. The system, put in place by JR Jerram of Spalding, Lincolnshire was very basic and lacked an individual rope tensioning device.

Over the years the Ellacombe bellropes stretched frayed and snapped and likewise the tempers of those sent to repair them and the bells fell silent for the best part of a century.

If the eminent architect William Butterfield had listened to the request from the Bell Founders to make the tower sixteen feet square, the minimum dimension required to accommodate the bells in full circle mode there would have been no problems but Butterfield insisted on a slender tower. In desperation Mr John Taylor wrote “ We beg to place before you our utmost objection to the plan – and thus the space – you will afford us for the new Baldersby Eight Bells. If it is not possible for any reason to afford us the additional space we respectfully wish to point out that it will not be possible to have the bells of the size you have intimated or they must be fewer in number –say six only.”

Mr Butterfield was made fully aware of the potential overload before the tower and spire were constructed and the possible consequences but chose to ignore the Bell Founders concerns. Perhaps he was mindful of the wishes of his dead patron, Viscount Downe and thus told Taylor to get on with the job of casting the bells as ordered and put them in the tower because if he didn’t he would find someone else who would.

Needing the money and the patronage of an aristocratic family John Taylor complied and cast and installed the eight bells.
On 8 April 1858 he wrote to Viscountess Downe as follows:

“and sincerely hope the work is executed to your Ladyship’s perfect satisfaction. For the distinction of your Ladyship’s patronage we have also most heartily to offer our zealous and unfeigned thanks and can only intimate again the honour of again being furnished with your Ladyship’s commands is our earnest desire”

The Dawnay Bells were all cast by Taylors of Loughborough in 1857 and were transported to Baldersby on September 3rd that year just twenty-six days before the consecration of the church. Hung in a cast iron frame the specification of the bells are as follows:

The last formal record of the Bells being used is recorded in The Bell News and Ringers Record of 13 June 1885 in which it is noted that a full 720 Bob Minor in 30 Minutes was rung on 19 May 1885. Change ringing on the bells was clearly very difficult and probably dangerous and ceased to be practised.

Over the years the tower louvers rotted and this allowed wind and rain to cause erosion of the stonework within the tower and bell frame fittings to rust and assisted by minor vandalism the wheels and pulleys were broken and ropes cut. For many years the door to the tower and spire was locked and the bells left to the nesting aspirations of the local jackdaws and pigeons .

Matters changed in the late nineties. With the approach of the Millennium there was a surge of interest across the country in churches and their bells and in the autumn of 1998 a feasibility study regarding the ringing of the Dawnay Bells was carried out by David Town and John Hallett of the Yorkshire Association of Change Ringers , Cleveland and North Yorkshire Branch.

They concluded that full circle change ringing on the existing bells would never be possible given the size of the tower and that the best option would be to fit a computerised electro- magnetic chiming system available from none other than the original bell founders, Taylors of Loughborough.

On 28 January 1999 an on- site meeting was held at St James attended by Messrs Hallett and Town, Mr Colin Banton, the Business Development Manager of John Taylors , Major Tim Helps of the Baldersby PCC and Councillor Stuart Carter of Baldersby St James. Colin Banton confirmed that the bells could be made to chime.

The decision was subsequently taken to set up a project the mission of which was “To restore the bells and ring in the Millenium”
Some 16,500 churches the length and breadth of Great Britain had embraced a national campaign “Ring in 2000”. These churches were to stage a peal of bells across the country to greet the Millennium at mid-day on New Year’s Day. The parishioners at the Church of St James the Greater in the Parish of Baldersby with Rainton wished to participate in the creation of this bold sound of Christian Jubilation and in doing so restore the bells to serve the church and community for years to come.

The Restoration of the Dawnay Bells Project was headed by a steering group:

This team assisted by many from the parish and through numerous generous donations completed the mission on time and on budget. The millennium was greeted and the bells re-dedicated at a special service conducted by the Bishop of Whitby on February 6th 2000 .