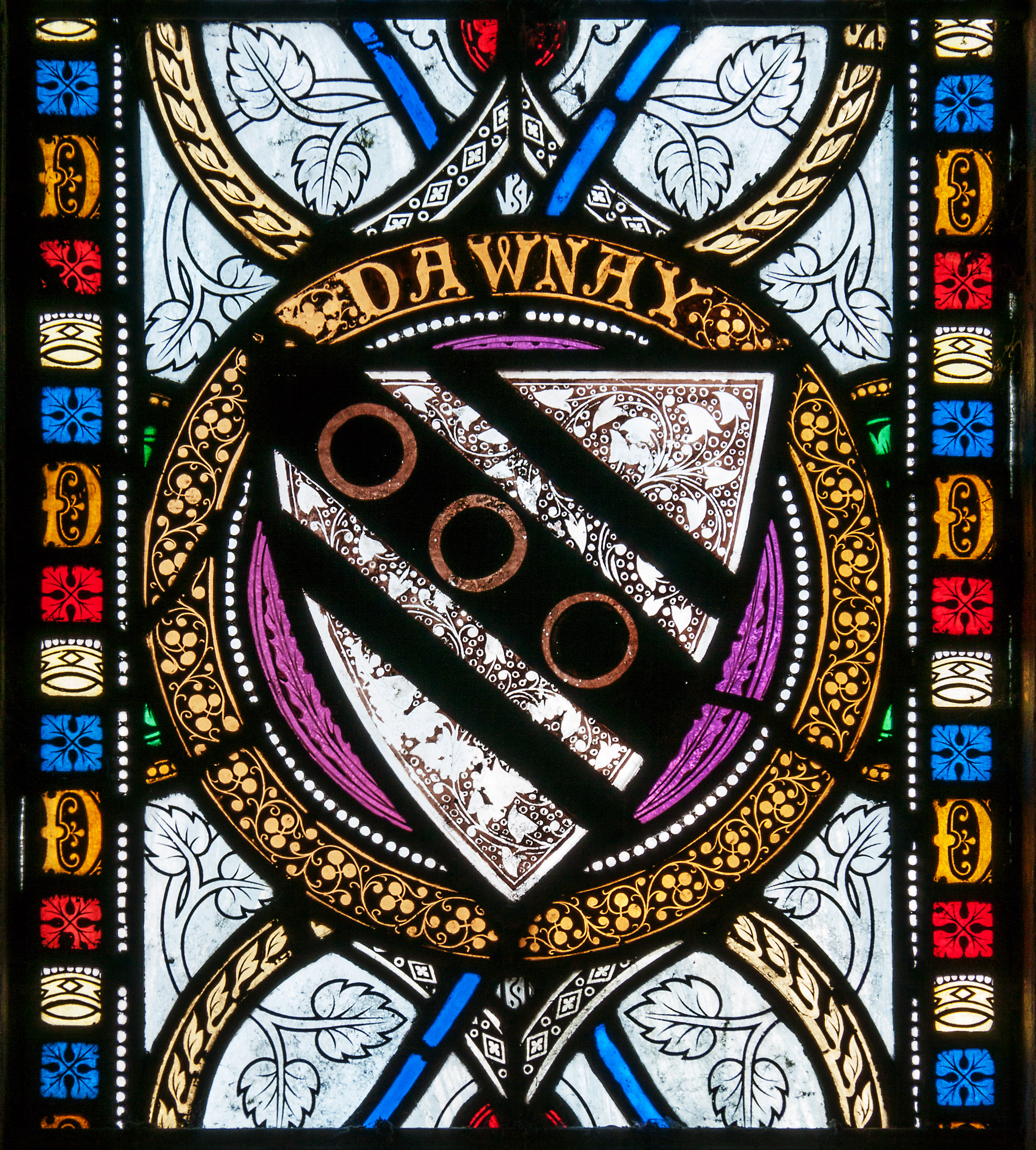 All the windows in the church are of stained glass and to some extent reflect Butterfield’s preference for cold blues to the hot and glaring effect of large masses of scarlet and yellow. The west window was designed by William Wailes (1808-1881. ). He was the proprietor of one of England’s largest and most prolific stained glass workshops based in Newcastle. The window contains the arms of eight families connected with the Downes: Dawnay, Darrall, Newton, Percy, Etton , Pleydell, Legard and Burton.

The circular window above the west window contains a lamb, as an emblem of Our Lord, surrounded by angels. The window to the left of the west window shows St Michael contending with the Dragon and the one to the right depicts the Archangel , St Raphael (Book of Tobit)

The sixteen windows to the aisles and clerestory were designed by Frederick Preedy(1820-1898.) He was an architect and glass painter and an associate of Butterfield. The eight upper windows are densely patterned stained glass. The eight lower windows depict biblical characters, female to the north and male to the south as follows:

Sarah, wife of Abraham .
Ruth, who vowed to follow Naomi.

St Peter, also known as Simon Peter, one of the Apostles and leader of the early Christian Church.
St Andrew, an Apostle and brother of St Peter.
St Stephen, stoned to death the first martyr of Christianity.
St John the Baptist, foretold the coming of the Messiah and baptised Jesus in the River Jordan.
David, second king of the united kingdom of Israel and Judah, slew Goliath and wrote Psalms.
Joshua, one of the twelve spies of Moses. Lead the Israelites in their conquest of Canaan.
Abraham, the first biblical patriarch of Israel.
Noah, constructor of the Ark.

Easily overlooked in the apex of the four windows nearest the chancel are four quatrefoils the stained glass of which acknowledges the four gospel writers ,St Luke, and St Matthew (North Aisle), St John and St Mark (South Aisle).

The window above the altar in the side chapel contains the initial letters , INRI, (Iesus Nazaremus Rex Iudaeorum , “Jesus of Nazareth, King of the Jews”) which was written on Jesus’ cross. The depiction of biblical characters continues in the chancel side windows, one depicting the scene of the Annunciation of our Lord to the blessed Virgin Mary and the other exhibiting figures of St . James (the patron of the church) and St. John, his brother. Beneath the figures are representations of St. James’ martyrdom and St. John writing the Revelations in the island of Patmos.

The east window was designed by Michael O’Connor and his son Arthur who were both London based stained glass artists and also associates of Butterfield. This shows the scene of the Transfiguration of Our Lord . “Jesus took Peter and John and James , and went up into a mountain to pray. And as he prayed the fashion of his countenance was altered and his raiment was white and glistening. And behold, there were with him two men, which were Moses and Elias: who appeared in glory, and spake of his decease which he should accomplish at Jeusalem.” (Luke 9, 28-31). Jesus is portrayed flanked by Moses on his right and Elias on his left and below St Peter, St John and St James.